I was eagerly waiting or Bandra Fair 2010 to start, as its one of the days i really think back on my good old kiddy days!!!

I tried my level best to go on the first day, cause that’s the most important day….. But i couldn’t make it.

It was not possible for me to go during the weekdays!!

So finally my fiancee and myself decided to go on the last day i.e. Sunday 19th September 2010 and we made it.

I must say it was the first time, that there was less crowd during the fest. 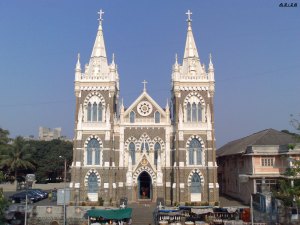 The Basilica of Our Lady of the Mount, more commonly known as Mount Mary, is a Roman Catholic church in the city of Mumbai, India.

The church is one of the most visited churches in the city located in the suburb of Bandra. Every September, the feast of St. Mary is celebrated on the Sunday following 8 September, the birthday of the Virgin Mary. This is a week long celebration known as the Bandra Fair and is visited by thousands of people.

The church stands on a hillock about 80 metres above sea level overlooking the Arabian Sea. It draws lakhs of devotees and pilgrims annually. Many faithful attest to the miraculous powers of St. Mary.

During the Bandra Fair, tens of thousands visit the shrine. The shrine attracts people from all faiths who pray to the statue for thanksgiving or requesting of favors.

In 1760, the church was rebuilt and the statue was substituted with a statue of Our Lady of Navigators in St. Andrew’s church nearby.

This statue has an interesting legend. It goes that a Koli fisherman dreamt that he would find a statue in the sea. The statue was found floating in the sea between 1700 and 1760. A Jesuit Annual Letter dated to 1669 and published in the book St. Andrew’s Church, Bandra (1616–1966) supports this claim.

This is the most awaited event of the year is come up. Popularly known as the Bandra Fair, the festival is celebrated on Mother Mary’s birth anniversary and people of all faiths throng to seek her blessing.

The streets take on a carnival-like atmosphere, with shops and mini-bazaars offering everything from food (yummy), shopping opportunities (@ good prices) and joyrides (super enjoyment).